The Gran Hotel Inglés 5-Star in Madrid is in the cultural, shopping and entertainment nerve centre of Madrid, at the very heart of Barrio de las Letras (Literary Quarter). The hotel is re-opening this March, 132 years after it first opened its doors. Elegance, style, comfort and Great Gatsby-style sophistication define this landmark in Madrid.

On 27 July 1886, La Correspondencia de España was ‘very pleased’ to announce that ‘the illustrious owner of the Café Inglés, Don Agustín Ibarra, has just purchased the fabulous house being built on 10, Calle del Lobo with the aim of turning it into a hotel. On the extremely spacious ground floor, he will open a world-class restaurant.’

A hundred and thirty one years later, the street is no longer called Lobo but Echegaray instead; we have not travelled to London but to New York to ‘get the finest furniture’; and the chef does not come from Bordeaux but from Madrid. However, Carmen Cordón and Ignacio Jiménez have kept the goal set by Agustín Ibarra more than a century ago. In the words used back then, ‘The new house will be furnished in a modern style to a very high level, sparing no expense.’

The goal – and challenge – of this couple of hoteliers based in Majorca is to restore the Gran Hotel Inglés to its former splendour, since they believe guests should feel welcome and enjoy their stay in what is ‘by far one of the top hotels in Europe.’

If in the nineteenth century La Época would praise the facilities of a hotel that was second to none in Madrid, featuring ‘elevator, bathroom on every floor, electric lighting, steam heating and everything guests could want to feel comfortable, all in one place’, in the twenty-first century the Gran Hotel Inglés will boast the latest amenities while displaying the sober, classic elegance that characterised it in the old days.

As Don Agustín did in the 1880s, the new owners crossed the pond in search of an ally who would understand and manage to restore the old magnificence of the original rooms, dining halls and guestrooms in a contemporary style. In USA they met David Rockwell and his team, who accepted the challenge to bring the Gran Hotel Inglés back to life. The experienced, award-winning team of architects and interior designers were excited about restoring the hotel to reflect its heritage, supplying the high-end furniture Carmen and Ignacio were looking for for their first hotel in the Spanish capital.

Located on the ground floor, the hotel’s restaurant will be ‘as large as’ the former restaurant, as described in El Liberal on 1 August 1886. However, today they will not ‘lay a table for 300 diners,’ since that would be ‘difficult in this Court.’ Fortunately, the quality of Spanish food and the talent of Spanish cooks have grown so much that it has not been necessary to travel to Bordeaux to find Willy Moya, the right chef. He is currently involved in the design of the kitchen and the preparation of the menu. Willy and the hotel owners want to serve the traditional recipes that used to please guests in the nineteenth century and which turned the house of Don Agustín into a culinary must-try, albeit with a modern twist – tasty and full of nuanced flavours.

The number of guestrooms has dropped from 72 to 48. Guests will no longer have to walk down the corridor to get to the gents’ or ladies’ toilet, as of course all the rooms have a bathroom with a shower and a tub. This was almost impossible in the past, and it is still not that easy today. The guestrooms will be ‘roomy, bright and airy’. And with the help of Willy Moya and his team, the kitchen will be described as an enthusiastic contributor described it in the past for La Iberia: ‘The cuisine in the new hotel is excellent, and the wine cellar, superb.’

Recortes de prensa con los precios del Hotel InglésKeep this date in mind: 17 December 1886 – the day when the Gran Hotel Inglés opened its doors for the first time. On the same date 131 years later, Madrid and Barrio de las Letras will have a ‘really remarkable’ hotel again featuring 48 ‘comfortable, tastefully decorated guestrooms and reading halls.’ The restaurant will have ‘electric lights and exclusive, high-end tableware and dinnerware,’ and of course, the hotel will feature ‘elevator and an improved heating system’, thanks to which ‘fossil fuel will not be required to keep the house comfortably warm.’

Since the cost of living has soared since the days of Don Agustín Ibarra, the financial team are deeply sorry that the budget of the extensive renovation is way higher than the ’90,000 duros’ invested by Mr Ibarra. Likewise, it has been impossible to keep the hotel rates at ‘10 pesetas’.

Anyway, at the Gran Hotel Inglés they want you to feel at home while away from home, and this is why they have hired top-quality staff, led by general manager Javier Polo, who was formerly operating manager at the Hotel Villamagna, also in Madrid. Also, they have designed ‘elegant and comfortable guestrooms, private dining halls for lunch and dinner, round tables and à-la-carte service,’ hired ‘the best chef and pastry chef,’ come up with ‘a well-appointed wine and cocktail list with labels from Spain and abroad,’ and are ready to offer guests ‘baths (whose modern name is ‘spa’), heating, elevator, telephone (Wi-Fi, USB, and so on).’ Moreover, the staff speak ‘(almost) every language on Earth.’

Finally, getting to or from the train station will not be an issue, for the hotel is centrally located in one of the busiest, most interesting and most dynamic neighbourhoods in Madrid. Guests at the Gran Hotel Inglés can get around by whichever means of transport they choose, even engine-driven ones! 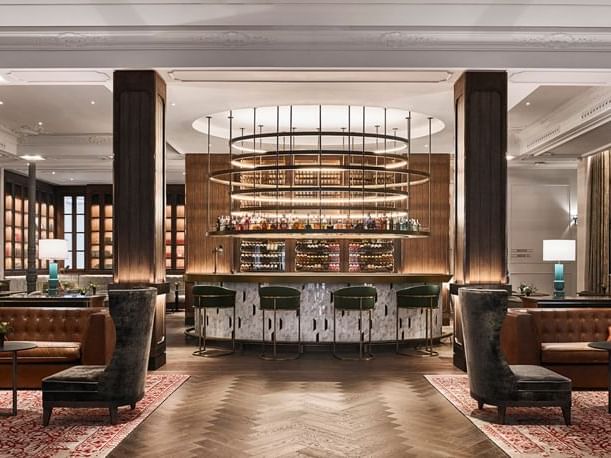