Enjoying a good flamenco show in Madrid ought to feature high on the list of any traveller enamoured with the arts. A flamenco show is more than a performance of singing and dancing; it’s an outpouring of passion and an artistic expression that is quite simply impossible to capture in words.

Although it emerged in the Andalusia region, it is now Madrid that can boast both the finest quality and the greatest number of tablaos, as flamenco venues are known; this has helped it gain recognition as the “flamenco capital of the world”.

Every year, thousands of tourists visit the capital to revel in the art of flamenco and return home having been enchanted by this very special art reflecting the very essence and heart of Madrid.

If you would like to enjoy a different kind of experience, a show that combines visceral emotion with duende, or magical spirit, and have a night to remember during your stay at the Gran Hotel Inglés 5-star in Madrid, don’t miss the chance to visit one of Madrid’s flamenco tablaos; we promise that you won’t regret it.

Flamenco, a tradition with considerable art

Flamenco is one of the most recognisable music genres of Spanish origin. It combines singing, music and dance to offer a veritable tradition-filled spectacle and, above all, an abundance of artistic expression in which passion plays an especially important role.

It emanates from Andalusia, especially in the areas around Seville and Jerez de la Frontera, but also some parts of Extremadura and the Murcia region. The origin of art of flamenco is steeped in mystery. Although many people associate it with the popular culture of Andalusia and gypsies, this hypothesis vies with many other theories and accounts, none of them confirmed.

Where many commentators and experts agree is that the art of flamenco is the outcome of hybridisation and its origin is highly varied. It is a musical genre that combines Castilian romances with Moorish and Sephardic music and many other influences, which turn a flamenco show into a marvel that is quite unlike any other form of artistic expression.

Such is the value of flamenco to Spanish culture and identity that in 2010 UNESCO officially classified it as part of humanity’s Intangible Cultural Heritage.

Madrid has the honour of being recognised as the world’s flamenco capital due to the fact that it has more tablaos than any other city in Spain and, by extension, anywhere in the world. Indeed, the capital is home to many of the world’s finest flamenco artists.

If forms a domestic and international showcase that has served to introduce the art of flamenco to visitors from all over the world since mid-way through the last century.

Madrid’s flamenco tablaos attract more than a million visitors every year. Any day of the week is perfect for going to a flamenco show of any kind, whether major performances in the city’s theatres or more intimate affairs with singing and dancing at tablaos and small venues.

It is also worth mentioning the flamenco festivals that are organised in the city, such as Flamenco Madrid, a competition that is held in May every year at the Centro Cultural de la Villa, and Suma Flamenca, the preeminent flamenco festival in the Community of Madrid, which is held in June.

The best places to enjoy flamenco in Madrid

Flamenco has been part of the essence of Madrid since the 19th century, since when the tablaos and bars have kept faith to the custom of hosting performances. Audiences have the chance to enjoy unadulterated flamenco at its most authentic while sipping a refreshing drink or savouring a delicious meal.

In what follows we recommend some venues for enjoying the art of flamenco in the heart of Madrid:

Cardamomo Tablao Flamenco: Meeting point for some of the finest flamenco artists and a veritable declaration of love for the art. Such prominent figures as Joaquín Cortés, Estrella Morente, Tomatito and Raimundo Amador have appeared at this tablao. Dinner is served 45 minutes prior to every show with a range of menus and a variety of tapas to choose from, all washed down with a wide selection of wines, cava, champagne and sangria.

Las Carboneras: This tablao was conceived with the intention of recreating the live music cafés of the last century with an avant-garde and contemporary feel. It rounds off the experience with a mouth-watering menu of traditional Spanish dishes that will transport you to Madrid at its purest and most authentic.

El Corral de la Pacheca: This venue was founded in 1971 and major flamenco artists of the likes of Isabel Pantoja, Rocío Jurado and Manolo Escobar have appeared on its stage. This venue offers live shows every day of the week, which may be enjoyed accompanied by delicious dishes of authentic Spanish cuisine.

El Corral de la Morería: This is one of the best-known flamenco tablaos in the world, having played host to such major flamenco artists as La Chunga, Manuela Vargas, Isabel Pantoja and Pastora Imperio. It was inaugurated in 1956 by Manuel del Rey and is located in the heart of Madrid, next to the Royal Palace. 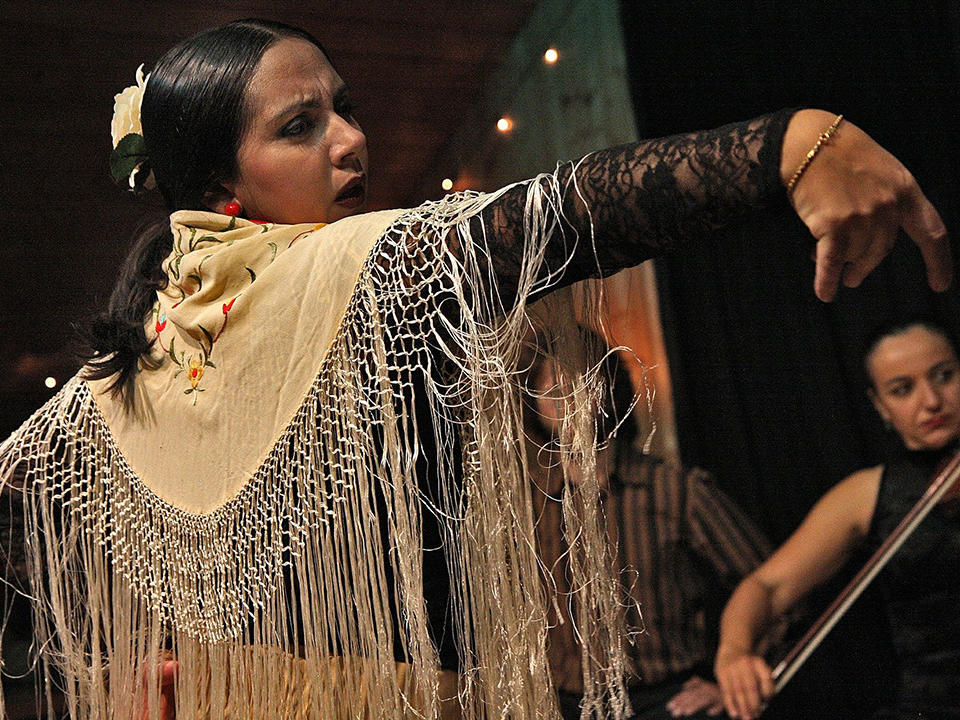