Travelling to New York without moving away from Madrid? Yes, now it is possible. From 22nd March to 14th April, Gran Hotel Inglés will become the Seagram’s New York Hotel and invites you to discover the latest tendencies of the city that never sleeps. Savour the unmistakeable (and irresistible) cupcakes from Magnolia Bakery. Discover the authentic after-work New York or enjoy a different Sunday plan with our Bingo Brunch. The most traditional New York awaits you at Gran Hotel Inglés 5-star in Madrid.

For the first time ever, Magnolia Bakery, the popular North American cake shop that owes a great deal of its fame to Carrie Bradshaw and the series, Sex in the City, has come to Europe.

From Monday to Friday, Gran Hotel Inglés and Seagrams invite you to remember this epic television scene and feel like one of its stars in its exclusive pop-up. For three weeks, the authentic cake makers from Magnolia Bakery will travel to Madrid to delight those with a sweet tooth with its exquisite preparations. You will be able to savour its brownies, cupcakes or its one of a kind banana pudding in the cosy space that Seagram’s NY Hotel has designed for you. Or if you prefer, pick them up from the take away service. Whatever you may decide, we are convinced that you will not want to miss out on sampling any of the Magnolia Bakery delicatessens.

Bingo Brunch is the plan that is triumphing at weekends in Manhattan this 2019. What is the secret? It is very simple: a first-rate gastronomic proposal, the best cocktails, live music, Bingo!

Now you can enjoy a true Sunday Funday in the purest New York style by Seagram’s NY Hotel in the heart of Madrid. Let yourself be surprised by the spectacular brunch that Byron Hogan (former executive chef at the American embassy) has prepared for the occasion with the finest ingredients on the market and that genuine New York flavour.

There is no doubt. The best after-work is at Seagram’s NY Hotel: good music, a refined atmosphere and cocktails served by Death & Co, one of the most influential bars in New York’s East Village and which can boast of having patented combinations, such as Oaxaca Old-Fashioned, Naked and Famous or The Conference.

From Wednesday to Saturday, Gran Hotel Inglés and Seagrams invite you to relax and get away from routine in the best New York atmosphere in the capital. At Seagram’s NY Hotel, the most talented and creative bartenders from Death & Co await you along with the best New York music. Can you ask for more?

From Thursday to Saturday evening, the best shows worthy of Broadway, Harlem, West Village, Central Park or Chelsea will be performed at Seagram’s NY Hotel. The Yllana company, responsible for hit musicals like “Hoy no me puedo levantar” or “The Hole” brings you the wildest and most daring experiences in the Big Apple. For two and a half hours, the New York Show will submerge you in an unprecedented show through the most emblematic neighbourhoods of the city that never sleeps.

Enjoy an unprecedented luxury experience and soak in the essence of the most iconic city in the world by staying at the Gran Hotel Inglés, the oldest hotel in Madrid. Music, flavour, style, fun and comfort guaranteed! 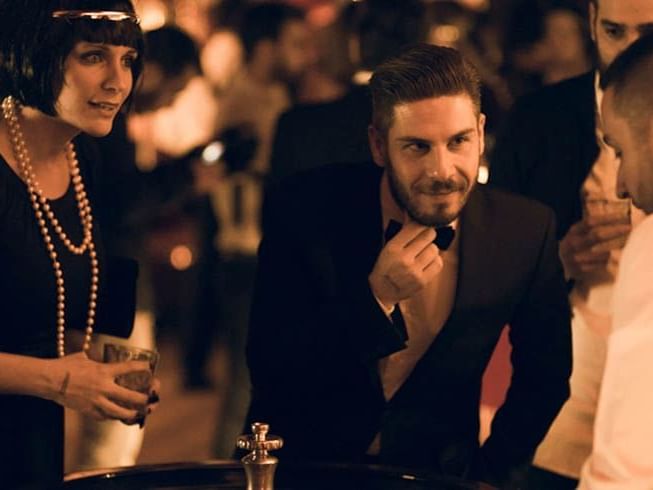 Gran Hotel Inglés invites you to discover the authentic Broadway